They say the best way to get to know a place is to walk it. Through many centuries Cork has experienced every phase of Irish urban development. It is a city you can get lost in narrow streets, marvel at old and cobbled lane ways, photograph old street corners, gaze at clues from the past, engage in the forgotten and the remembered, search and connect for something of oneself, and thirst in the sense of story-telling – in essence feel the DNA of the place.

This audio trail provides insights into the histories of the Cork city centre’s bridges, their place in Cork and some of their surrounding histories. The walk around the bridges is about two hours in duration and the trail is clockwise from South Gate Bridge up the south channel and down the north channel to cross back to the south channel. It ends at Nano Nagle Bridge.

Take a walk with us and discover more. All you need is your smartphone and some headphones!

On the 18th of August, the Bridges of Cork audio trail got a special mention on Raidió na Gaeltacha on its segment Saol Ó Dheas. Listen to what Micheál Ó Laoghaire had to say about ‘Droichid na Laoí’ aka Bridges of the Lee.

A stroll down The Marina is popular by many people. The area is particularly characterized by its location on the River Lee and the start of Cork Harbour. Here scenery, historical monuments and living heritage merge to create a historical tapestry of questions of who developed such a place of ideas. Where not all the answers have survived, The Marina is lucky, unlike other suburbs, that many of its former residents have left archives, autobiographies, census records, diaries, old maps and insights into how the area developed. These give an insight into ways of life and ambitions in the past, some of which can help the researcher in the present day in understanding The Marina’s evolution and sense of place going forward.

Take a walk with us and discover more. All you need is your smartphone and some headphones!

It was said that the city of Cork was built on a series of 13 islands. The channels in between have all been arched over or filled-in over the centuries, so that only two remain: the river Lee (North Channel) and the river Sabhrann (South Channel). It is possible to navigate both those rivers, but only in very small boats or kayaks, and even then one has to keep a close eye on the tide. It has to be low enough to go under all the bridges, and yet high enough to clear all the weirs. Using Meitheal Mara’s dedicated guide, Jack O’Keeffe will explain the principles of planning a full ‘CORKumnavigation’ and will show you some of the heritage highlights along the way. 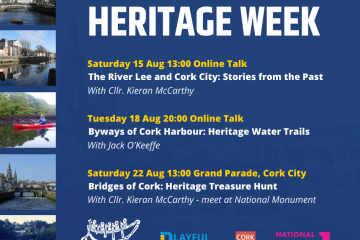 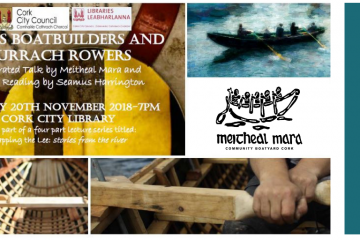 “Mapping the Lee: stories from the river”

Join Claire ni Mhuirthile and Cathy Buchanan who will be talking about the history of Meitheal Mara. The talk is part of the Autumn Lecture Series in the City Library. Poetry reading by Seamus Harrington Read more…