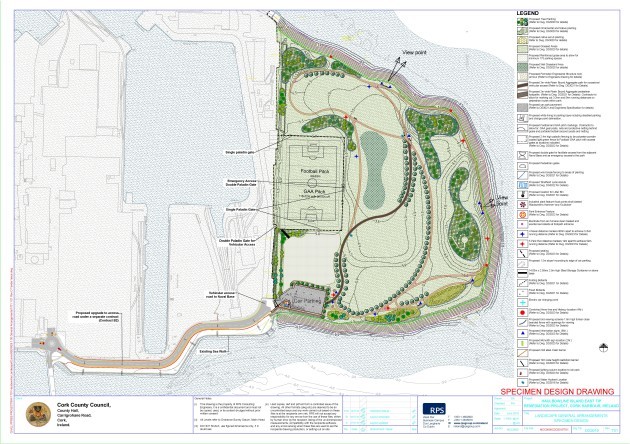 The contract has been signed for the long-awaited capping of the Haulbowline tip. According to the consultants RPS “…..When it is finished, the nine-hectare site will be transformed into a public park with walkways and cycleways. It will also have a car park, a number of viewing areas and some sports pitches….” but no provision for a slip or pier, although the site is surrounded on three sides by water and lies just across the channel from Spike Island.

Meitheal Mara made a submission in 2013 (download copy), at the public consultation phase of the project. It recommended that the remediation works should:

Cork is one of Ireland’s oldest cities located at the lowest crossing point of the River Lee; Cork Harbour has been a maritime trading centre since earliest times. And presents a wonderfully intact mosaic of original, authentic and surprisingly complete sites and structures that testify to its heritage as a provisioning, emigrant and naval port. In the past, Cork Harbour was the last port before ships on the sea routes from Britain left the coast to head out into the open Atlantic. An enormously large, safe, natural harbour with a rich agricultural hinterland gave the city and harbour a unique role in provisioning ships from Europe from the late 17th to the early 20th centuries as well as a long history as a passenger and naval port, including its associations with the Lusitania and the Titanic. The harbour also has a rich natural heritage of land and seascapes, wild-life and islands.

Meitheal Mara has as one of its core interests the development of Cork Harbour for social, community, environmental and recreational purposes. In particular, it encourages and promotes on-the-water activities in the harbour, especially for small boats and with a special concentration on those extensive parts of the harbour which are not subject to high levels of commercial shipping traffic and are otherwise under-utilised or unknown.

Meitheal Mara’s long-established commitment to the harbour is best known through the Ocean to City Race, now in its 9th year and expanded to a week-long Festival which includes the Cork Harbour Summer School.

Less well known is the constant use of the waters of the harbour and estuary by its currachs and those of its sister club Naomhóga Chorcaí, numbering up to 50, the Bantry Long-boat Fionnbarra and the Dragon-boats. This fleet delivers Meitheal Mara’s on-the-water programmes to a clientele numbering some 400 persons each year.

Less well known again are the stream of submissions, publications, studies and reports produced by Meitheal Mara dealing with the estuary and harbour. They range from submissions to City and County Development Plans to the production of the pamphlet ‘New Destinations in Cork Harbour‘ to contributions to the Spike Island Masterplan as a design team member. Most of them are concerned with the key issue of improving access to the waters of the harbour for boats and people. A listing is given in Appendix 1.2 of the original submission.

Meitheal Mara has campaigned for improved access to the river and harbour over a number of years. Access to the water has two principal aspects:

• Access for boats to go on the water – mainly via slips.
• Access for people going onto boats, via piers, quays, ramps, pontoons and steps.

Meitheal Mara is a member of the design team for the Spike Island Masterplan, led by STW Architects, which was adopted by Cork County Council in December 2012. A key section of the Masterplan addresses access to Spike Island:

The (reclaimed) East Tip is the favoured jumping-off point for access to the island, particularly for 3 & 4 above. The range of possible solutions include a roll-on, roll-off ferry, a low-tide causeway and a single-lane bridge with opening span.

Construction of any one of these would impact on the containment structure in particular, with significant cost implications, if not provided for in advance. There is an opportunity to future-proof the design in this respect by making a study of the likely impacts of access structures and facilities on the capping and perimeter engineered structures for the East Tip and modifying the design accordingly.

The civil engineering solutions for the capping and perimeter engineered structures of the East Tip remediation can have a significant direct impact on the feasibility and cost of providing access to and from the waters of the harbour and Spike Island. There is the potential to demonstrate joined-up thinking and achieve beneficial outcomes for both developments. Meitheal Mara would propose that a multi-functional slip be provided, or provided for, in the design of the capping and the retention structure of the East Tip.

The slip could serve as:

Note: A suitable type and scale of slip to fulfil all these functions would be the Cross-Harbour Ferry slips at Glenbrook and Carrigaloe.

A study could be carried out to determine the likely implications of the slip and other access structures and facilities on the capping and perimeter engineered structures, with the object of future-proofing the design and minimising the possibilities of future disruption or alternatively of including the construction of the slip in the civil engineering works contract.

A full copy of the submission, including all appendices, can be downloaded here. 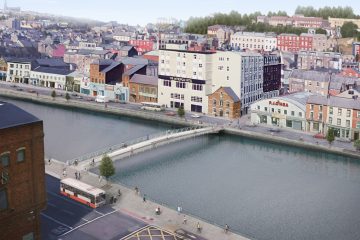 Submission from Meitheal Mara on the proposal for a pedestrian and cycle bridge linking Merchant’s Quay and St Patrick’s Quay  (Part 8 of the Planning and Development Regulations 2001). Submitted to Cork City Council on Tuesday Read more…